You are here: Home / School Innovation / Taking PROGRESS CULTURE and TWO, FIVE, TEN into the World

I read a blog post from Tracie Mastronicola, Academic Dean at  San Francisco Friends School, over the weekend. Having worked with a small group of faculty members at SFFS over a couple of days in early February regarding creating a process by which they might redesign their daily schedule, I was particularly interested to read her piece entitled, “‘Committing to The Air’: An update on our scheduling process”. It is a lovely piece–one I hope you will read. I love the metaphor in the title. It led me to reflect on my visits to a couple of extraordinarily different, but equally fascinating, schools with whom I had the privilege to spend some time over the last months.

Perhaps once or twice a year I work with leaders and faculty members at independent schools to help them frame out a process for change. Usually these conversations have had to do with daily schedule reinvention; however, while daily schedule change may be the end, I am most interested in the means–a smarter process to hold the ambition of complex schools striving to make impactful change. [At the end of this post I will include a small sampling of links to posts addressing aspects of this topic].

In the last six months I have worked with two schools–Punahou School in Honolulu and San Francisco Friends School. Both experiences have been remarkable and invigorating, and importantly, they each have left me with this conclusion: if we are to be able to move our schools with enough finesse and thoughtfulness, as well as move them at a pace that will:

we must be willing to change the means by which we try to accomplish change processes.

I do not make the claim that the specific process I help schools work with is the only way to do this; however, it is the way I have found to be most helpful in not only arriving at a great answer for a step forward, but ensuring that a school community is healthier at the end of the process than it was leading into the process. As opposed to the terrible habit of process corrosion that often occurs when large institutions engage a change process, the approach to which I subscribe places becoming healthier as a culture at the center. In fact, becoming healthier as an institutional culture should always be the invisible number THREE of the TWO, FIVE, TEN, meaning it should be one of the non-negotiables in any significant change process.

The Role of Stretching the Rubber Band in a Progress Culture

Foreshadowing Progress in a School Culture

Two, Five, Ten: Guidelines for Establishing the Priorities of a Change Initiative

The Heads’ Letter: Responding to a Changing World

Please join me this Friday... https://t.co/tXQ2yKrZOx
View on Twitter 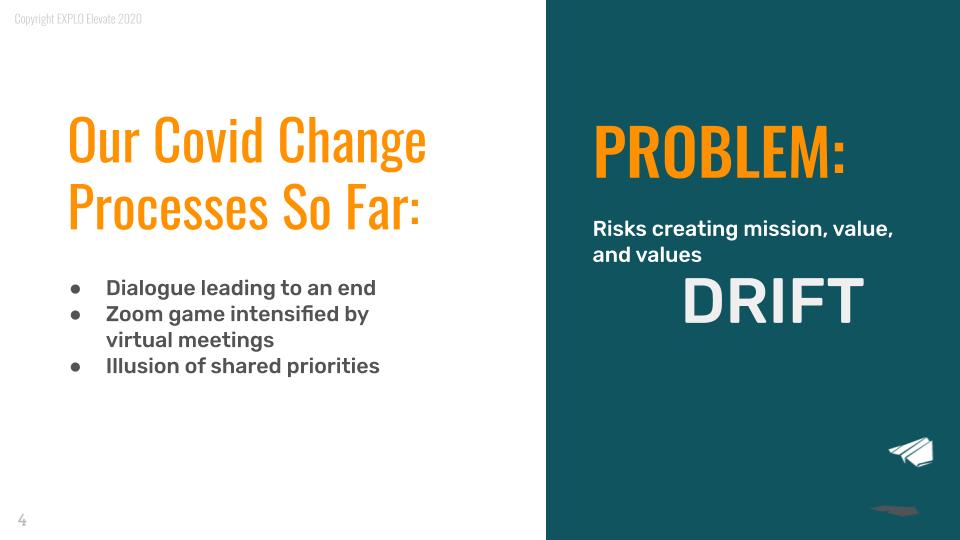 EXPLO Elevate @EXPLOElevate
On last week's webinar, @jrosspeters discussed how #COVID change processes are creating a problem of drift. Learn more about how leaders can move towards a #progressculture on Friday's webinar at 10am EST: https://t.co/fOYpf2ijTt
#indyschoolleaders #leadership https://t.co/dMkqyJC3AT
0
0
J. Ross Peters @jrosspeters

My daughter, Eleanor, will be a Junior in @AshevilleSchool next Fall. This 2012 post always gets a lot of traffic on #MemorialDay. It makes me happy that it does. #Bravery #Sacrifice #Remembering https://t.co/w7EZP8xwLR
View on Twitter
0
1
J. Ross Peters @jrosspeters

I voted for John Prine for #POTUS in 1984...the first vote I ever cast. @JohnPrineMusic @FionaPrine https://t.co/olcR7KQWft
View on Twitter
0
0